Okay, I am the other writer for Royal Revival that has been chosen to spill his thoughts on the Myers-Shields trade.  While Damion Mandalas looked at a few of the positives and tried to see both sides, I am just going to react on how I really think this trade panned out for us as Royal Nation.

I will always remember last night, it could very well define my childhood love of the Kansas City Royals.  December 9th, 2012.  It was a cold, chilly night; I was sitting by the fire watching the Dark Knight rises when all of a sudden, I clicked the Twitter app on my iPhone only to find that Andrew Friedman had been lurking in the shadows waiting to pounce on his prey.  Okay, I'll quit this theatrical thing I got going on, but really I was freaking out.  In fact, when I saw the possible trade I got that bad feeling in your stomach when you think you're about to puke.  This couldn't be true. Remember during the Winter Meetings when these rumors were going on? And they passed through?  Surely that would be the case this time.  No, this rumor seemed different, tons of analysts were reporting this rumor and tons were saying it could be done shortly.

After an hour or two of frantically panicking about us trading what some Royals fans called the "Last Hope" Wil Myers.  It was complete.  It was the worst text notification I have ever received from ESPN.  I just stared at it.  No words could come out.  That initial reaction was only seeing that we had traded Wil Myers and other prospects for James Shields and Wade Davis.  I was sick just seeing that, but when it came out that we had also given Jake Odorizzi and Mike Montgomery AND Patrick Leonard.  I knew that Andrew Friedman had struck again.  I have two friends of mine that are Rays fans.  They are actually brothers, and I joke with them all the time saying "The Royals aren't smart enough to play with Friedman".  Now there is actually some evidence to that statement.

This trade made me sick.  It was a desperation move by a desperate General Manager who hasn't done squat in his tenure with the Royals.  What the heck is he doing?  We clearly overpaid for James Shields.  Those two Rays fans will tell you the same, and I am as big of a James Shields fan as they come. I've always loved this guy.  However, we gave up way too much for possibly (probably) only two years of "Big Game James".  I was happy that Yordano Ventura and Kyle Zimmer weren't involved in the trade because I like them both better than Odorizzi and Montgomery but still, trading our Minor League Player of the year for a guy that we will probably only have for two years doesn't make sense to me at all.

I'm not a huge Jake Odorizzi fan but I definitely think he could turn out to be a solid 2-3 SP in the big leagues.  I don't know how Friedman got us to put him in the trade but whatever he said to sweet talk more really worked.  Mike Montgomery going doesn't rile me up as much, because he has just disappointed me the last two seasons.  I loved this guy and thought he was going to be a STUD.  I still think he has more upside than Odorizzi does, he just needs someone to tap into it.  The scary thing to me is I think the Rays will tap into his potential.  It makes me cringe that the Rays possibly could have one of the best hitters in the majors in Wil Myers and if Montgomery reaches his potential then they could possibly have one of the best pitchers as well.

Now that I have been through all of the negatives to this trade and why I don't think it was a smart move by the Royals; lets go through some WHAT IF scenarios.

If I would have wrote this post last night, this paragraph would not have been included.  I was too upset, and just pissed off at what Dayton Moore had done.  I was among those on the Royals Twitterverse that were just going crazy tweeting how stupid I thought we were and retweeting other people that were saying the same thing.  After a good nights sleep, I have thought through some things.  This trade maybe, just maybe could turn out to be a decent trade for Royals fans.  Just think, WHAT IF we do indeed advance to the playoffs in the next 2 seasons? WHAT IF James Shields leads us to an ALDS?  How much fun would that be?  Throughout my 20 years of being a Royals fan I have never once seen a playoff team or even sniff contention most years.  Now we have no excuses, we pushed the chips all in.  Dayton can say that these next two seasons aren't "playoffs or bust" seasons but they are.  Royal nation is aching for a winner, and now you made the big move.  It's time for us to make the transition to being a playoff team.  WHAT IF we do make the playoffs in the next two seasons or so, how fun would that be?  I don't know, I have never been a part of it.  However, I'm sure it would feel a heck of a lot better than consistently losing 90-100 games and watching Luke Hochevar take the mound on opening day.

I will end this post with one tweet I said last night, that drew some response from Royals fans.  I said I have been going to Opening Day for the last 8 years or so and not once have I seen an above average SP on the hill for us.  This year I can finally be there on Opening Day when we do have a stud who can beat anyone on any given day. 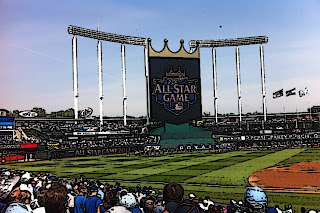 That is a step in the right direction, like I said I was unbelievably negative about this yesterday.  I still hate the trade but the chips are all in so we as fans might as well go all in too.  "Big Game James," you have a great opportunity to bring a winner to a city starving for one. I truly hope you embrace this challenge.
Posted by Paden Bennett at 12:50 PM