The Royals Offense is as Bad as it Seems

The Royals offense obviously has been disappointing yet again in 2014. Most of us would make the case that this is mainly because of the Royals inability to drive the baseball. We'd all likely also admit that this team does a pretty good job of making contact, albeit very weak contact.

Given the amount of contact that the Royals make, it is likely that the success of this offense will fluctuate more than that of offenses that rely on walks and the long ball. This is simply because as a statistic batting average on balls in play can fluctuate a great deal. This thought process has led us in the past to make excuses for the offense and specifically individual players.

This season for instance the Royals offense currently ranks 18th in baseball in batting average on balls in play. How much difference would our opinion of the offense be, if for instance, instead of posting a .293 BABIP, they were above the .300 mark? Specifically, we might look at individual players and point out guys who are likely to improve.

Sure, Moustakas has been bad, but damn the luck his BABIP is just .132!

Unfortunately, what we must remember is that there also exist methods to calculate expected BABIP. These methods can vary, but Jeff Zimmerman has found good reason to believe that Hard Hit% plays a crucial role in the xBABIP formula. Either way, the days of assuming that players should fall in around the .300 mark in batting average on balls in play are behind. It is clear that players have an enormous say in how the many of their balls are converted into outs.

Here's a look at the Royals current hitters. The first number is their current BABIP and the second number is their xBABIP supplied by Zimmerman. (You can view the numbers for yourself here.)
As you see, the Royals have actually been quite fortunate when it comes to their batting average on balls in play. On average, each starting Royals is overachieving by about 39 points. This would indicate that instead of being near the middle of the pack in BABIP, the Royals should actually be ranking near the bottom of the league.

For Royals fans this is a scary notion. Is it really possible that an offense averaging 3.9 runs per game has actually outperformed itself? It's a tall order, but let's hope the Royals realize that being a good hitter isn't just about putting the ball in play.

A portion of the fan base complains that Butler is fat, too slow, doesn't hit for enough power, and can't deliver in clutch situations. Another portion of the fan base points out that Butler is a career .313/.394/.460 hitter with runners in scoring position and that he gets on base at a career clip of .362. It seems as though this debate has gotten so divisive that there is no grey area in regards to Billy Butler.

Obviously, there is a segment of fans that view baseball much differently than myself. They beat their chest to stats like RBI and they prefer to keep math away from their evaluation of players. Obviously, many of these individuals greatly undervalue the strengths of Butler. More surprising to me are the analytics on the other side of the fence that are unable to see flaws in Butler's game as well as some of his concerning trends.

In regards to last season, it is true that Butler was valuable to the offense. His 116 RC+  was the second best among everyday hitters in the lineup. At the same time, it is not unfair to expect more from Butler. In 2013, he was coming off a 138 RC+ and the Royals were pushing the chips into the center of the table. Despite this there were reports of him coming to camp overweight, and then in season his average flyball distance dropped from 297 to 276 feet. As a result his HR/FB% nose dived, his home run total dipped, and his slugging percentage fell all the way to .412.

What most of us have seemed to underestimate though is just how much more harsh the aging curve is for heavy players than it is for average sized individuals. Here is a look at the aging curves of the two body types, with Butler's OPS numbers overlayed: 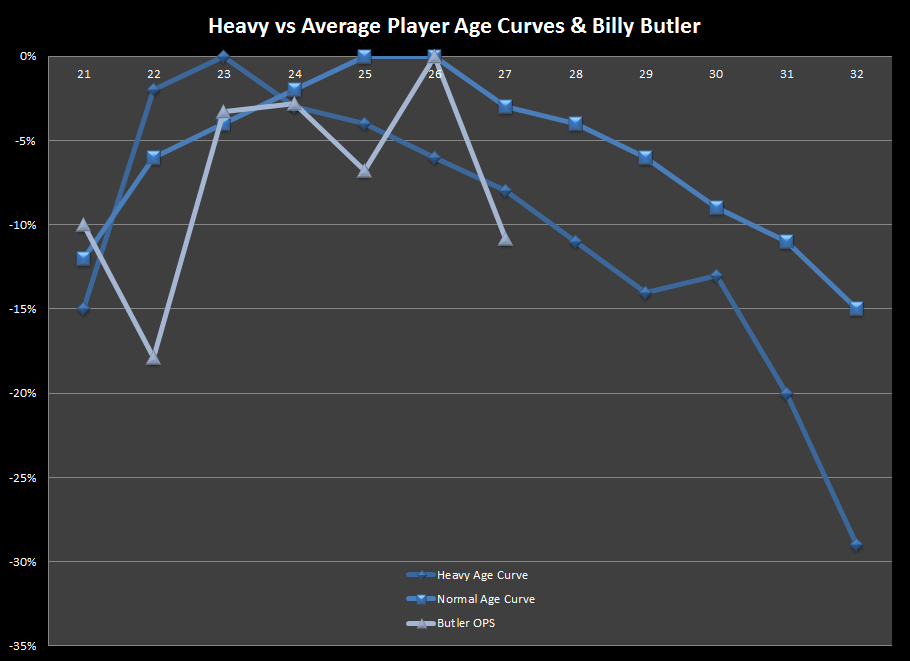 As you can see, the curve of heavier players dips much earlier in the player's career than it does for average sized individuals. For Butler's own sake, I haven't even included this year's numbers in the illustration of how his own aging curve is playing out. If you are a defendant of Billy Butler and you like to cite advanced statistics to back up your argument, you have to recognize that there is an analytical reasoning behind the notion that Butler's skillset could regress much more quickly than the average player.

Butler appears to be heating up. In his last 9 games (yay! selective end points), he is hitting .343/.368/.514. However, not only has Butler's ground ball percentage increased in four consecutive seasons, but his average fly ball distance has also decreased. Even when he is getting the ball into the air he isn't driving it as far.

Do I expect Butler to finish the year with a sub .700 OPS? Absolutely not. But I also wouldn't bet on him getting back into the .850+ OPS range. Based off the aging curves of heavier players in the past, Butler should have two or three more seasons with an OPS around .800. However, after that it could be a pretty quick fall for the Royals former first round pick. Hopefully, Butler can prove me wrong and can stay hot throughout the rest of 2014. We all know the offense needs the lift.
Posted by Landon Adams at 11:41 AM No comments: