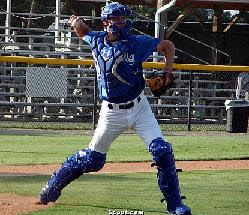 Believe it! I love this guy as a prospect and I had a really hard time putting him at number 4 and not higher. In fact I struggled with my 4, 3, and 2 spots a great deal but in the end I am going to drop Myers at 4 due to his lack of professional experience and his level in the development process. On draft day most viewed Wil Myers as a first round talent, and many thought he would be taken by either the Royals at #13 or the Red Sox later in the first round (I'm too lazy to look up when their pick was). However, Myers fell in large part because of signability concerns and when all was said and done the Royals nabbed him with the 91st pick of the draft and signed him to a bonus of roughly $2 mill.
Myers will begin his professional career as a catcher, but since he hasn't played much at the position thus far in his life, he is a bit of a project at the spot. While he has a strong arm with a quick release, he definitely needs to improve on his pitch blocking skills and with his lack of experience I would imagine his game calling needs to improve as well. I expect him to stick at the position and be the long term solution for Kansas City. But if he doesn't stick most scouts agree that he could handle the move to any spot that isn't in the middle of the infield, and some scouts even believe that he could be an above average centerfielder.
Myers has a very refined approach at the plate for a player his age and already has good plate discipline. He should hit for both average and power as he progresses, with some scouts comparing him to former Braves slugger Dale Murphy. Considering Murphy won back to back MVP awards in 1982 and 83, I'm would be fine if Myers turned into a similar hitter. I've got really high hopes for Myers and I expect him to move quickly through the system. He should start he year at full season Burlington, probably splitting catching duties with Salvador Perez.
Posted by Landon Adams at 8:42 PM