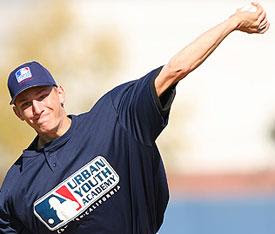 As I have stated before on my top prospect countdown, I seriously believe that the top few prospects are at this point fairly interchangeable. This is not intended to be taken as there aren't any elite guys in the system, but instead as me saying there are several prospects that I feel could have elite status in a years time but at this point need to post some positive results at higher levels of competition. (Myers= no full season experience, Crow= no minor league experience, Montgomery and Moustakas= no experience above A ball.) Because of the breakout potential of several of the Royals top prospects, the system could very feasibly shoot up the rankings between now and a year from now.

Now let's talk about Montgomery. Montgomery was a supplemental first round draft choice in 2008 and like Royals ace Zack Greinke he has a reputation for his fiery, competitive attitude. Despite being the leading scorer of his high school basketball team he was kicked off the team because he recorded so many technical fouls. While some would view this as a knock on his makeup, many, including myself, would view it as a positive. Montgomery is 6-5 and his frame has yet to fill out completely which leads many scouts to believe that he could add a few miles per hour that already explodes out of his hand and comes in at around 90-95 mph. Unfortunately the Royals conflicted with Montgomery this offseason about his long toss program. From the information I have gathered it sounds as though Montgomery had some unrealistic expectations that if he continued his outrageous long toss program then he would be able to get his fastball consistently into the high 90s. The Royals afraid that this program would put unnecessary work on the arm disagreed. Luckily the two sides seem to have come to a compromise which allows Montgomery to continue his long toss program, but not to the extent that he originally desired.

Montgomery features three pitches that should translate into out pitches at the major league level:

Montgomery also features an above average palmball that he has great command of, but scouts question whether it will be effective against more advanced hitters. Montgomery's mechanics have been solid and he has had no difficulty in repeating his delivery in professional ball. This is always a huge positive for a young pitcher especially when this pitcher is a lanky 6-5 lefty.

Montgomery could start the year in either Springdale or Wilmington in 2010. But I expect the Royals to take a conservative approach where he could join an awesome rotation that would include himself, Noel Arguelles, Tim Melville, and Chris Dwyer. After he dominates the Carolina League to begin the season he should be in Springdale by the all star break. There I imagine his numbers will drop as he faces more advanced hitters in a hitter friendly league, but I still believe that he will post a sub 3.80 era and solidify himself as a top tier pitching prospect. A year from now I expect Montgomery to be a highly talked about prospect that will compete in Spring for a spot in the Major League rotation