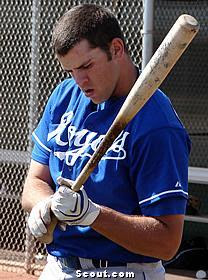 I can hear the cat calls already... "What?! Mous at 2, you must be out of your mind?" "How can you put Mous ahead of Crow and Myers he had a .297 OBP last year?" "We should have had Porcello or Weiters!" "Mous wears big pants!" Well I'm going to nut up here and stick with Moustakas in the number two spot, although as far as I am concerned Crow could legitimately be in the top spot and Mous could be as low as 4th. But I am going to leave Moustakas here for several reasons that I am going to discuss shortly.

As we all know Mike was drafted at number 2 overall in Dayton Moore's first official draft as the head man. Mous had set a California state record with 54 career home runs in high school and was coming off a senior season that saw him hit .577 with 24 home runs. Moustakas was chosen to be ab All-American 7 total times (3 by Louisville Slugger, 1 by the ABCA, 2 by Ea Sports and 1 by USA Today). According to one scout Moustakas was the top high school power bat since Alex Rodriguez was drafted by the Mariners.

Moustakas was selected as a shortstop by just as most forsaw he quickly slid over into the third base position. Whether or not this will be his final stop on the diamond remains to be seen as there have been many recent reports about Moustakas's lower half becoming too thick for third base. Also, note the twenty-four errors that he recorded in the Carolina League in 2009. Now I have heard that Frawley Stadium has a tough infield to field grounders on, but I am not sure how true this belief is. But I can offer a statistic they may be rather comforting to Royals fans that are concerned about Mous's defense. According to Sean Smith's TotalZone Rating Moustakas was a +13 runs per 150 defender in 2009. Which places him somewhere between an above average or outstanding fielder for the league. I look forward to watching Moustakas play third base this season in Springdale to see his fielding first hand.

Moustakas has such an outstanding arm (clocked in the upper 90s when he entered the draft) that many have suggested the Royals move him to catcher. This doesn't sound like to terrible of an idea, except that I am skeptical about any good hitting prospect being moved to a position that can diminish the players offensive value down the road. Rumor is that the Royals did approach Moustakas about such a move, but they were quickly shot down. Reports widely vary regarding Moustakas's physical shape but I would suggest that if he proves to not be able to handle the hot corner the Royals could try him in right field where his arm could become a huge defensive asset. This not to mention the Royals have a real lack of prospects in the corner outfield spots.

Now let's look at the concerning numbers that he posted in Wilmington a season ago. In 2009, he posted a line of .250/.297/.421 with 16 homers and 86 Rbis. But looking at his splits he posted a .206/.269/.381 line in the non-friendly confines of Frawley Stadium but a line of .292/.331/.473 line on the road. Upon further examination his luck removed line that takes park factors into consideration is .288/.334/.495. This line fits with the away line and I'm going to give him the benefit of the doubt on his 2009 performance. The concern for me is that Moustakas will never post an awe-inspiring on base percentage. However, scouts still rave about is quick wrists and light tower power that project for him to hit with both average and power.

I expect Moustakas to begin the 2010 season in Northwest Arkansas and even after his 2009 performance I don't think this would be an aggressive move on the Royals part. Much like Jeff Bianchi and David Lough did a season ago, I expect Moustakas to really break out in the Texas League I'm going to predict that he homers more than 25 times in the Texas League this season. (Gordon homered 25 times in his only full stint in the Texas League.) If Moustakas breaks out like I expect then he will fight for a spot on the 2011 opening day roster and force the Royals to make a tough decision on whether or not to send him to Omaha to begin the year. Hopefully, this turns out to be the case.
Posted by Landon Adams at 3:52 PM