I set out to write a post regarding how fly ball pitchers fair better in Kauffman Stadium than other parks. Basically, I took the top six pitchers in games started from each of Dayton Moore's six seasons at the helm. In a database I then compiled the innings pitched, ERA, ground ball percentage (league average 44%), and HR/FB (league average is 9.5%) of each of the starter's seasons. Following this, I weighted each starter's inputs into a team total based off of innings pitched.

Eventually, I ran a correlation analysis, as well as created a few line graphs that I overlaid over one another in order to get a quick visual. I did this in an attempt to determine how similar the line graphs were in structure. Not surprisingly, I did not find any serious connections between the elements. Of course, the sample size was incredibly small given that I was looking at team totals over six seasons.

I then decided that instead of focusing on the team totals, I would look at all of the starters individually. For this step, I simply created a scatter plot for both ERA versus GB% and ERA versus HR/FB. Here is a look at those scatter plots. 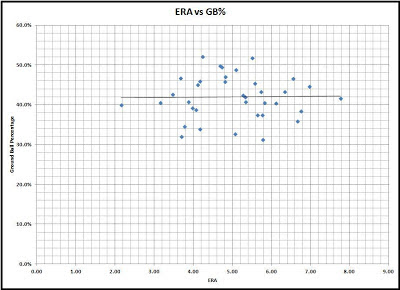 Obviously, there is nothing groundbreaking in this 15 minutes of research. The linear line above isn't anything to crazy. If we were to actually analyze how Kauffman favors fly ball pitchers compared to other parks, we would of course have to compare the above scatter plot to that of Major League averages. One thing that I will note, is that in general we are told that pitchers are better if they can induce ground balls. However, based off of the incredibly small sample above, our linear equation is actually very level across the board. In fact, if you examine the line closely, you will notice a slight slope indicated that fly ball pitchers fair slightly better at the K.

If we were to really look closely at these types of numbers, of course we would want to include strikeout and walk rates in our study. But if I had to make a conclusion on this quick study, the fact that the line tilts ever so slightly in favor of fly ball pitchers would lead me to believe that this type of pitcher should find Kauffman Stadium's confines friendly. 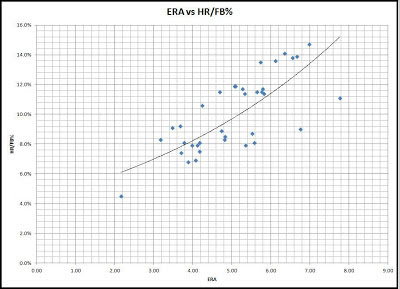 Examining our second graph, we once again don't find anything ground breaking. It doesn't take a genius to tell you that more home runs would lead to a higher ERA. I still have to wonder how this slope would compare to the slopes of other Major League parks, but given the dimensions of the K's outfield one would guess that HR/FB are lower for Royals starters. While I would expect the data points to be lower on the Y axis, I would also expect the slope to be less steep for other team's starters.

An excellent example of this came in 2009. Zack Greinke was excellent in many facets of his game during that season, but one aspect that was particularly incredible was his ability to limit home runs despite inducing ground balls just 40.2% of the time. Like I said, this was just one part of Greinke's success. However, given Kauffman Stadiums park effects and the manner in which Greinke was recording outs, it isn't any wonder how the Cy Young winner was able to outperform his xFIP by nearly a full run.

Eleven out of the 36 starters studied, recorded ground ball percentages below 44% as well as limited HR/FB to under 9.5% (I am including 2008 Greinke who just missed the cut with a 42.7 GB%). Here is how those starters rank in ERA among those unqualifying starters. I have put their names in bold.
The two unranked seasons that met the criteria were 2010 Davies (5.34) and 2011 Davies (6.75). Outside of a couple of Davies anomalies (leave it to Kyle Davies to screw something up), it seems pretty certain that the recipe for success at Kauffman Stadium is to keep the balls in the park, while inducing a large number of air outs. (Again this is a good recipe for success anywhere, I just suspect that it is more pronounced for Royals starters. More work would undoubtedly need to be done in order to confirm or refute this belief.)

What does this mean moving forward?

Whether the Royals intended to or not, they acquired several fly ball pitchers this offseason. Ervin Santana's career ground ball percentage is 38.9%, Jeremy Guthrie's is 40.6% and Wade Davis's is 37.9%. (James Shields's is 45.1%.) Davis is the only one of the first three that fall below 10% HR/FB threshold. However, Santana's career mark is 10.8% and Guthrie's is 10.6%. It doesn't feel too crazy to ask they cut just 1% off of their career marks.

I've long felt as though fly ball pitchers can really thrive in Kauffman Stadium. I've wondered many times whether Kauffman's postive affects on fly ball pitchers have been undervalued. Let's hope that this proves to be true. Let's hope that the rotation can keep the ball in the yard and the outfielders busy. If I'm right, we could be pleasantly surprised by the rotation's results in 2013.
Posted by Landon Adams at 8:18 PM