Friends in No Places 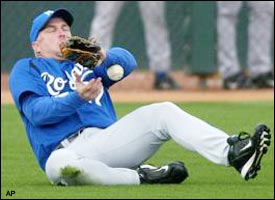 These were my first four thoughts after learning that Garth Brooks’ famous 1990 hit, “Friends in Low Places,” would no longer be the official 6th inning anthem of the Kansas City Royals. Instead, this anthem would be decided by a vote.

“The Royals are planning to hold a contest at each home game in the middle of the sixth inning that will allow fans to select a song from a list of three or more nominees. The winning song then will advance in bracket form until there is one winner…

“Like the NCAA tournament many moons ago, the anthem bracket will start with 32 contestants and work its way to a final two on June 7 against the Yankees. The fans' choice as the winning song will become the Royals' new anthem from June 8 on.”

According to Royals Vice President of Community Affairs and Publicity, Toby Cook, "We just felt that 2014 was a good time to try something a little different there … It's been a long tradition and it had become sort of our anthem at Kauffman Stadium. But now we'll be looking for a new anthem."

Guess what Toby, tradition isn’t made; it’s born. Born out of happenstance, molded out of acceptance, and continued because of legacy. By allowing this to be decided by such a silly thing as a vote, you are now saying that tradition is only as good as the times we live in. Yes, the song is old, but it’s not nearly the age of “Sweet Caroline”, and Red Sox fans have been “bah bah bah”ing for years. Do you think Boston’s front office will decide to replace it?

Of all the things the Royals would allow fans to vote on, why this? Why not the ability to vote on contract extensions, or free agent acquisitions, or whether or not to fire Ned Yost? Clearly these are things the fans need an input in since the front office can’t seem to get it right.

And of course the Royals would decide to replace the song the same year they make their slogan “Be Royal.” It’s clear that the Lorde hit, “Royals,” will be made the winner. The fix is in, and the second greatest cover up in human history will unfold in front of our very eyes, disguised as a clever marketing campaign.

Don’t fall for the ruse.

Haters have been criticizing the song for years. Why? Because every time the song comes on it seems like the Royals just gave up a crooked number on the scoreboard? Well, since “Friends in Low Places” became a sixth inning tradition in 2008, the Royals have sucked for the majority of that time. So what are you really mad at haters? Garth Brooks doing his damnedest to cheer up a pissed up fan-base? Or is it because one of the many terrible pitchers the Royals have had over that time just got shelled? Misplaced anger is how Hitler rose to power ladies and gentlemen; let’s not make that mistake again.

But there is still hope, Royals fans. Just a glimmer, but enough to leave this blogger with a tiny amount of hope that Garth will be restored to his rightful place on the video board. If the Royals allow a fair and balanced vote, then “Friends in Low Places” can still be the Royals anthem for 2014.

"You never know,” Cook said, “but I'm sure it will start out in one of the brackets.”

Do the right thing Royals fans. Vote for “Friends in Low Places” as the Royals anthem. Turn this sick and twisted vote into a statement that we are happy the way we are, that we enjoy our traditions, and that “Friends in Low Places” is the Midwest version of “Sweet Caroline.” But if the fix is truly in, and I will no longer have the pleasure of witnessing Garth on the video board at the K, then all I have to say is…

Honey, we may be through, but you’ll ALWAYS hear me complain.

VOTE #FriendsInLowPlaces to @Royals early and often.
Posted by NSB at 2:35 PM