Lexington Legends and the Best Mustache in Baseball 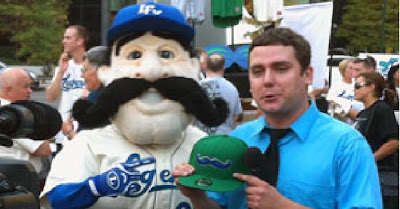 Minor league baseball is more about entertainment, more about community, and more about ‘wow,’ than their big brothers in the Major League. They have to be. Their stadiums only hold a few thousand, their players are usually not Major League caliber, and to get people excited about the team – not just half price beer – you have to, sometimes, get a bit creative.


And I’m not sure if there has been any team more creative than the Lexington Legends in their re-branding efforts as a Kansas City Royals affiliate.

Before I begin, however, I suppose I should introduce myself. My name is Nathan Bramwell, and this is my first post (and beginning of my meteoric rise to the top of Kansas City sports media) for Royal Revival, a blog that I was invited to write for. If you recognize my name, it’s because I am a junior author for Arrowhead Addict, where I write about the Chiefs a couple of times a week. If you haven’t heard of me, then start reading Arrowhead Addict. Alright, enough with my shameless plug and back to this introduction business. I have always been a baseball fan and had the privilege of interning in minor league baseball this summer, where I gained an appreciation and fondness for the minor leagues and their unique and geographical specific brands and mascots.

I mean, how can you not enjoy names like the Richmond FlyingSquirrels, the Montgomery Biscuits, the Vermont Lake Monsters, and InlandEmpire 66ers; unique names with unique logos, and all with a background reason of why. Sure, professional sports teams everywhere can say the same thing, but minor league teams have the ability to border more on the ridiculous side.

While the Lexington Legends might not have the coolest name in the world, what their marketing efforts are doing this fall skips ridiculous and goes all the way to epic.

The Legends are making a mustache one of the team’s primary logos.

According to MILB.com, the Legends road hats will be a kelly-green with a Royal blue mustache adorning it. "Minor League Baseball is all about the 'wow' factor, and we wanted to go beyond the normal stuff you'd see at the ballpark," said Hall of Fame namesake Ty Cobb, the Legends director of creative services and graphic designer. "And we wanted to be the team to do this first, to have a mustache on a hat.”

"It started as kind of a joke," said Seth Poteat, the Legends General Manager. "But the more we talked about it, the more we said 'Why not?'"

Now, they didn't just come up with a mustache logo out of nowhere. It pays tribute to the team’s longstanding mascot, Big L (seen at the top), who has always had a mustache himself and been somewhat of a facial hair aficionado. “Our mascot, he actually has a mustache, so we're not just hopping on a fad. ... We're going to be easily recognizable when on the road,” said Cobb. “Fans can just look at the mustache.”

In a side note, it’s kind of weird that mustaches are a fad. My sister in high school walks around with I [heart] Mustache bracelets, and “I Mustache You a Question, But I’ll Shave it for Later” shirts. It’s quite disturbing. We were never this weird in high school, right …?

The Legends changes don’t stop there. According to the article, the mustachioed mascot rappelled down the 410-foot Lexington Financial Center while wearing the Legends' new uniforms. Upon hitting the ground and getting unharnessed, he showed off the new style amidst a large crowd that had gathered for downtown Lexington's recurring "Thursday Night Live" outdoor party.

The logo itself is also changing from a Big L with a smirk to a Big L with a scowl. The Legends are also the first to use the abbreviation ‘Lex’ as part of a sports logo. As far as linking the logo to the area, there is an illustration that depicts the white fences that are common amidst the region's many horse farms. Horses are referenced, again indirectly, on the team's alternate cap. The chiseled "Lex" font is meant to recall the chiseled drystone walls that line historic horse farms.

But let’s be honest, the mustache is the reason I wrote this article and the reason you've justified reading it. The mustache now makes the team legen – wait for it - dary. Legendary!

How many times do you think they've heard that joke?
Posted by NSB at 1:41 PM