Sorry About the Wait, Dinner is Served 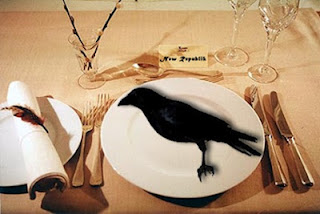 (Time for me to eat some crow.)

Entering the season I feared the Royals would give the last rotation spot to Luis Mendoza instead of Felipe Paulino. Despite very pedestrian peripheral numbers in Omaha, it seemed the organization had bought into Mendoza's Pacific Coast League leading 2.18 ERA. Not to mention former Royals starter Phillip Humber was coming off a season in which he found some success in the White Sox rotation.

It seemed as though the Royals would be so determined to not allow another starter to slip through their fingers, that they would overlook certain statistics which appeared to show that Mendoza had no right to hold down a spot in a Major League rotation. Eventually, injuries occurred and Mendoza broke camp in the big league rotation.

I tried to look at the bright side. You know, at least this way the Royals can find out he doesn't belong and move on. After four starts, an ERA of 6.00 and a strikeout to walk ratio of 0.55, it finally appeared that the rose colored glasses would be cast aside and the dream of Mendoza in the rotation would finally come to an end.

Instead the Royals rotation was swamped by injury. Starters Felipe Paulino, Danny Duffy, and Jonathan Sanchez all hit the disabled list and the Royals needed arms to fill out their abysmal rotation. Mendoza, who had shown marginal improvement as a long man was given another shot, almost more by default than anything else.

But then something happened. Perhaps, Mendoza made a mechanical adjustment. Perhaps, he grew a pair of gonads and began to challenge hitters, or perhaps he found a lucky rabbit's foot. Whatever it was, Mendoza started striking some guys out. Since his return to the rotation Mendoza is striking out 6.3 batters per nine innings. When you consider that in the same time frame he has lowered his bb/9 to 2.3 and that he is getting more ground balls than ever it isn't hard to see why he has quickly changed his reputation among Royals fans.

Watching Mendoza you can tell that he is a different pitcher than he was at the beginning of the year. Typically, I try to avoid broad statements and gut feels in my writing but the dude is just pitching with more confidence. His fastball has more life than any Royals starter and since his return to the rotation he is 4-5 with a 3.64 ERA.

The Royals are clearly in desperate need of front line starting pitching heading into next season. But the Royals also need to figure out a way to field the middle and back of the rotation. Just a couple of months ago one may have wondered if the Royals had a single starter deserving of a spot in the 2013 rotation. Today, it appears that at least one of those spots should be filled by Luis Mendoza.
Posted by Landon Adams at 10:12 PM