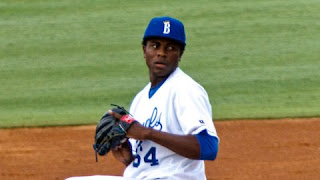 To be blunt, the wheels fell off for Robinson Yambati in 2011. After a fantastic 2010 campaign saw him rocket up the prospect rankings, Yambati totally lost control in the Appy League last summer. As a result, he walked more batters than he struck out in 2011.

When he's on Yambati displays a three pitch arsenal that made him the Arizona League's second best prospect following the 2010 season. Yambati's fastball typically sits in the low 90s, but when he is on can hit 96-97. According to Baseball America, Yambati also throws a hard slurve and a change up. His stuff and command vastly improved during 2010, but both took steps back in the Appy League. His walk rate climbed to 5.60 while opposing hitters beat him up to a .458/.527/.802 line.

Yambati's fastball at one point was said to have good life, but my theory is that for some reason it was too straight in 2011. In 2010, Yambati posted a 2.38 GO/AO, but in 2011, that number dropped to just 1.75. When you couple this number with the batting line of opposing hitters it becomes apparent that batters were having a much easier time squaring up Yambati in the Appy League.

Early in his career Yambati's control problems stemmed from the lack of repetition in his delivery. When he finally began to repeat his delivery in Arizona his command and velocity both improved dramatically. I'm not scout, but I think Yambati's repetition likely took a big step back in 2011. As a result of decreased velocity, my guess is Yambati tried to throw harder, resulting in straighter fastballs with less life. A straight fastball and poor command makes for a recipe for disaster.

Yambati is still very young. He will just be 20 years old for the 2012 season. My guess is he will be either reassigned to Burlington, or the Royals will try a change of scenery approach and send him to Idaho Falls. My fingers are crossed for the latter as I will be spending the summer in Pioneer League territory.