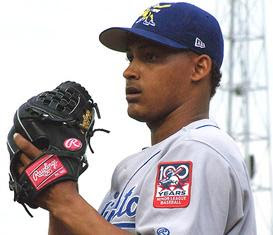 It feels like Carlos Rosa has been a prospect forever and considering how bad the Royals bullpen was a season ago it is absurd that he wasn't given an opportunity in Kansas City. I'm not going to talk about the fact that Rosa was the original reliever that was to be shipped to Florida for Mike Jacobs, because I don't want to have to think about Mike Jacobs ever again. Obviously I wish that the Marlins would have felt that Rosa was healthy and wouldn't have persisted that Nunez replace him in the trade, but honestly even if it would have been Rosa for Jacobs we would have still been getting a bad deal. Rosa still has a lot of time left under team control and as long as injuries don't continue to derail his career he should become a fixture at the back end of the Royals pen during that time.
Rosa has a fastball that sits in the low 90s that is his best pitch, plus a mid 80s slider and a change up. All three pitches are serviceable and his fastball and slider are both quality out pitches. At a glance Rosa's numbers didn't look so hot this season in Omaha, but his FIP was actually a solid 3.80 and his K:BB rate was 48:11 in his last 32 innings pitched. Rosa should be in the Royals bullpen to start the 2010 season and I expect him to quickly become a go to guy when outs are vital.
Posted by Landon Adams at 8:23 PM