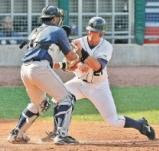 Bonilla is the second of the young high upside catching prospects in the organization that we will discuss here at Royal Revival. According to Baseball America Bonilla's tools are stronger than the aforementioned Salvador Perez however, his tools may not grade out as strongly in the long term. Like many I had my fingers crossed that Bonilla's numbers in the Arizona League would translate to full season ball in his first opportunity, however this was not the case. His offensive numbers fell from .357/.405/.625 in 2008 to .217/.281/.311 in 2009. Even though Bonilla's numbers fell off drastically in 2009 I expect to see him receive another promotion to start 2010 due to the influx of catching prospects behind him. If Bonilla could cut down on the strikeouts (26.2%K) and his Babip is a little more fair to him he could see drastic improvement in his offensive numbers. However, if he does get the bump to Wilmington Frawley Stadium could wipe out those improvements on his numbers for 2010.